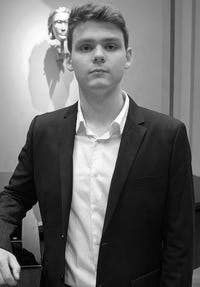 Born in Moscow in 1997, the baritone Stefan Astakhov first studied the violin, cello and piano in his native city and subsequently took piano lessons at the Musikschule J. S. Bach in Leipzig. Since 2015, he has been studying voice at the Hochschule für Musik in Detmold. He also attended vocal master classes led by Karlheinz Hanser at the Universität für Musik und Darstellende Kunst in Vienna (2016), Dmitri Vdovin at the Opera School of the Bolshoi Theatre in Moscow (2016), José van Dam Queen at the Elisabeth Musique Chapel in Brussels (2017) and Makal Bogdan at the Karol Lipiński Academy of Music in Wroclaw (2017/2018). Stefan Astakhov has been a finalist at a number of competitions, and he has received third prize at the Dušek Vocal Competition in Prague (2010) and first prizes at the Jugend Musiziert competitions in Leipzig (2011) and Essen (2014). In 2016, he advanced to the final of the Bundeswettbewerbs Gesang Berlinin the junior category. In 2017, Stefan Astakhov debuted in the role of John Styx in Offenbach’s Orphée aux enfersat the Landestheater Detmold and portrayed Figaro in Mozart’s Le nozze di Figaro at the Wroclaw Opera.
Season 2017/2018